A good Samaritan has stepped up to help Charlotte’s dearly departed continue to rest in peace. 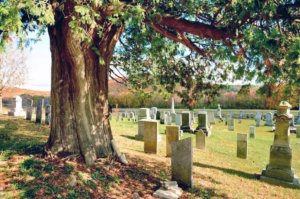 For the second time since its installation in 2019, an unknown culprit appears to have damaged the fence protecting the historic West Burying Ground, also known as the Barber Hill Cemetery, in a traffic incident on Greenbush Road. The cost for a repair will exceed $5,600.

“The fence was pretty wrecked,” board member Lewis Mudge said.

The recurrence prompted town administrator Dean Bloch to ask cemetery commissioner James Laberge and “the contractor that does the mowing” whether the fence’s location might need an adjustment. “They ultimately concluded that it shouldn’t be moved,” Bloch reported.

Normally, third-party contracts that exceed $5,000 require a competitive bidding process, but because the town’s insurance will cover most of the cost in this case, the selectboard reasoned that, at its next meeting, it could simply rehire Middlebury Fence, the company originally responsible for the project. Only Board Chair Jim Faulkner disagreed with this informal decision.

As it turns out, the remaining $1,000 bill won’t come out of the municipal budget, either. Bloch announced that a town resident, whom he did not name, had offered to donate the sum.