Fluffy’s bound for glory, giving and art in the Nevada desert Fluffy’s bound for glory, giving and art in the Nevada desert

On Monday, Fluffy had a dress rehearsal.

And Fluffy is just a newborn. Or more accurately a newly reborn.

Fluffy is a 40-foot, flat-nosed school bus that has been reborn into an “art car,” replete with clouds, LED lights and much more. 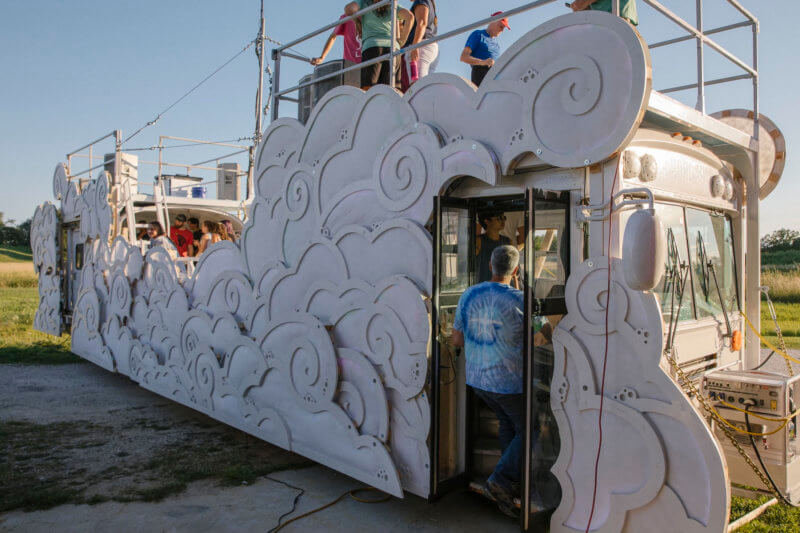 Fluffy the school bus is almost set to fly with its departure set for this Saturday to Burning Man in Nevada.

Like most dress rehearsals, Fluffy still had a number of glitches, which Duane Peterson, the owner, organizer and instigator behind the tricked-out bus, said would have he and lots of others working hard for the five days before its Saturday evening departure.

That night, Peterson and Fluffy will be headed to Burning Man, the annual event in the Black Rock Desert of Nevada.

Peterson said Burning Man’s Black Rock City is a “pop-up city” of more than 70,000 people who gather about two hours north of Reno for a week the week before Labor Day.

The event features art, community, self-expression and self-reliance, culminating with the burning of a 40-100 foot wooden “man” on the closing Saturday night.

“It’s not a festival. It’s not something that somebody else produces for spectators. We put it on for ourselves and for each other,” Peterson said. “It’s based on a gift economy, so there’s nothing for sale there; it’s not even for barter. It’s just about gifting and artistic creativity.”

Peterson bought the bus at the end of March and said he had the sense to know he couldn’t design and produce what needed to happen to realize a vision of transforming a school bus into a cloud-themed art car, so artists and crafty types brought their skills to the project.

Will Raap of Earthkeep Farmcommon supplied the space for about 100 artists, mostly based in Burlington, with skills including carpentry, welding and electricity to work on the bus since the spring. With Saturday bearing down, Peterson said they are in “full sprint now.” 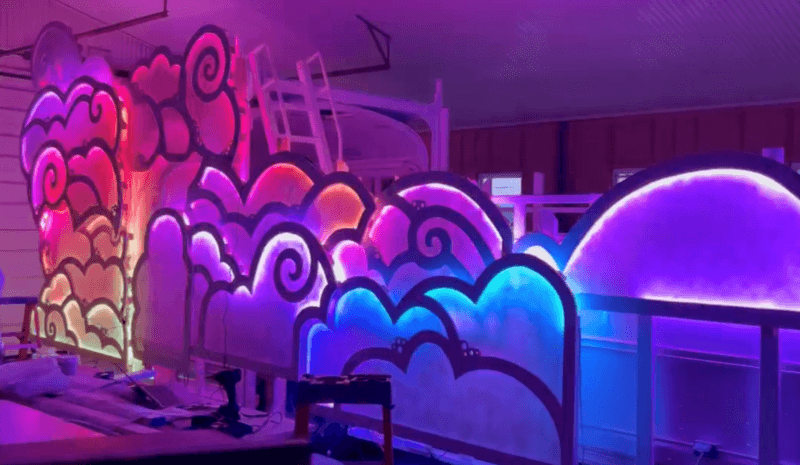 Fluffy puts Chitty Chitty Bang Bang to shame. This is just a portion of its 14,000 LED lights.

The workers “are our folks who have been part of this kind of art event for some time,” he said. They are people who have shared the Burning Man experience with Peterson over the 16 years he has been attending.

Burning Man has been on pandemic hiatus for two years, but he said they had been “noodling” over the idea of refurbishing a school bus to be a mobile art project that would qualify for certification by Black Rock City’s DMV at the event before it was shutdown.

The city is 5 miles by 5 miles so a public transit system is needed, a fleet of 800 art cars that people bring from all over the world, Peterson said. In order to get a permit from the Black Rock City DMV, you have to affirm that you will give free rides to fellow residents.

It took some time to find a suitable school bus because Peterson was insistent that Fluffy needed to be a bus with a wheelchair lift.

Folks with handicaps are often left behind in society at large, and even at times, in the stress of producing art for Burning Man, they are even left behind there, he said. “I’m hoping to bring joy to all kinds of folks.”

So, the handrails will have Braille.

Fluffy features a flame blaster, a mast and 14,000 LED lights, all of which have to be taken down at Earthkeep Farmcommon and packed up, so it can be driven legally for the three-and-half-days trip to Nevada. Once they arrive, they’ll jump into reassembling it, which will probably take another three or four days.

Peterson said the bus gets about nine miles per gallon. As one of the founders of SunCommon, the solar power company, that mileage does not thrill him, but he said they will buy carbon offsets to match the gas that’s burned in traveling.

Black Rock City is broken up into camps and Peterson’s camp will have about 16 residents going by the name of Duane’s Whirld. Find out more.