Green Up Day is ‘litterly’ a great day

Green Up Day is ‘litterly’ a great day

It was a warm and clear day of open blue skies and a slight breeze on Saturday, May 7 — Vermont’s Green-Up Day.

Vermonters spent parts of their day cleaning up trash off streets and collecting it in big green garbage bags that lined the roads.

Those volunteering in Charlotte were to return their bags to Charlotte Central School by the end of their run, where a huge garbage truck sat and filled as the day went on.

Walking up and down the roads were young families, kids, couples and individuals helping to do their part keeping Charlotte and Vermont clean. The energy in the air was vibrant and bright as people lined the roads peering around for trash. Members walked strung out irregularly along the sides of roads, ensuring no trash was left behind.

Young kids followed their parents in wagons, peering around for trash, and jumping out to pick up miscellaneous plastics and cans to add to their pile.

Although I didn’t have the luxury of being wheeled around in the sun in a wagon like the youngsters exploring the roads, by noon I did make it to Lane’s Lane — my designated street to clean.

The walk up and down Lane’s Lane and the neighboring roads was accompanied by a gentle breeze from the lake. Since the street borders Town Farm Bay, my eyes were peeled for even the smallest trash, knowing what was left could end up in our dear Lake Champlain.

My area was fairly clean in comparison to the higher concentration of litter closer to the main roads, scattered across the land were countless cigarette butts, Focal Banger cans, rubber and plastic, boxed wines, pieces of insulation, contact lens cases and a couple of unopened soy sauce packets.

Despite the amount of the trash, neighbors drove along the roads, smiling and waving to one another as they passed through, as everyone seemed excited to be outside and to contribute to cleaning up Vermont. People stopped and met one another’s dogs, compared trash pick-ups before continuing along their route. 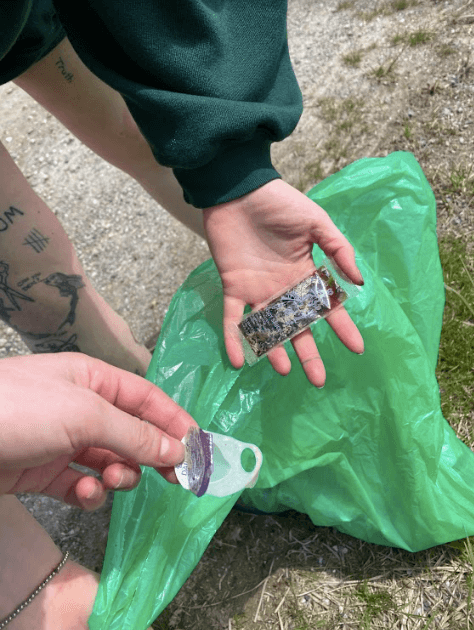 Soy sauce and contact lenses are among the most common finds. Photo by Halle T. Segal.

Near a home under construction on Lane’s Lane, I found the most trash — pieces of plastic, metal screws and ties, and countless orange button-looking materials along the property that neighbors the water. Small streams ran down the sides of the road, where pieces of insulation sat stuck beside rocks. The insulation and other floating pieces of plastic found a new home in my trash bag.

I chased around the smaller pieces of plastic as they blew closer to the water — imagining all the lone litter that gets left behind and ends up in Lake Champlain.

After a few hours, the road was clean, except for the remains of a tennis ball. Leaving it as a souvenir for a local dog felt better than putting it in the garbage truck.

My day of clean-up ended at 4 p.m., throwing my trash bags high into the garbage truck parked outside the school. A little too enthusiastically.

My first throw went over to land on the opposite side. That got a laugh, but my second toss landed perfectly on top.

I thanked the stationed workers for their help, as they did the same.