By The Charlotte News Staff

The Charlotte News was saddened to hear the passing of our longtime contributor and artist, Charlie Lotz. Charlie’s artwork graced the front page of the newspaper for many years.

Charlie passed away at the age of 99. He and his wife, Gert, moved to Charlotte in 1952, and he worked with The Charlotte News from its inception.

In memory of Charlie, we are publishing a few of his wonderful drawings, along with an article about who he was and his memories of working with the newspaper.

This article originally published June 2, 2016 in The Charlotte News. 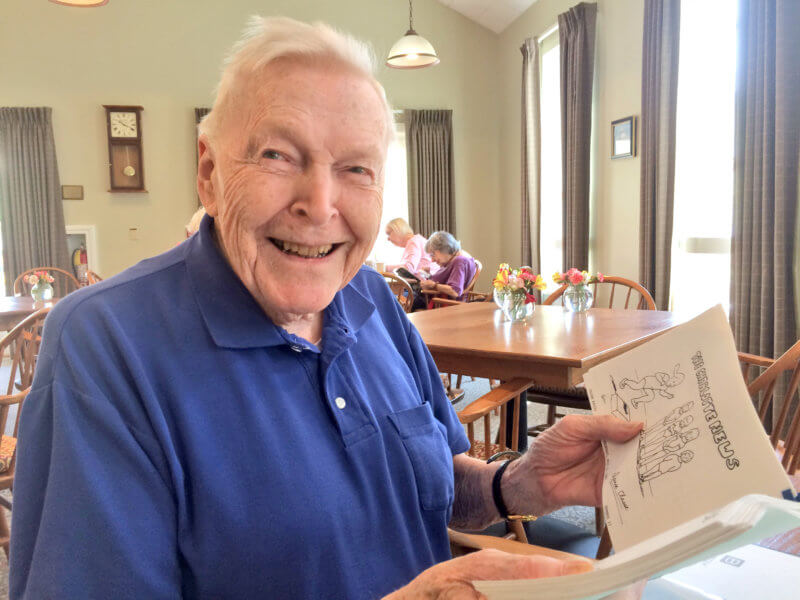 Rifling through the newspapers in The Charlotte News archives, one might be surprised by what headed the newspaper for years. Instead of a front page strewn with headlines and photographs, former publications of the newspaper featured simple line sketches just under The Charlotte News heading. For over 20 years you could find drawings of sailors, cartoons of Town Meeting Day or sketches of local wildlife. But who was the person behind this art?

Enter Charlie Lotz (above), the artist emeritus of The Charlotte News. Despite advancing in age (as we all do), Charlie still has a spring in his step and a smile to match. Charlie served during WWII, stationed mostly in Europe. Despite the war being a particularly harsh experience, Charlie does have some fond memories of it. “We went up to Iceland,” he said with enthusiasm. “We drove the Germans out of Iceland, and the Icelandic people were so happy we did that. It is a beautiful place—even though it is called Iceland. We loved it there.”

Charlie remained in the service after the war and found himself at the headquarters in Washington, D.C. The G.I. bill—a benefit designed to help service members continue their education—decided the next step in Charlie’s life. “I dropped out of the service briefly to go to college, just for a few months,” he said. But college life would end up taking him further from the military. “There, I met my wife, Gert,” Charlie said with a laugh.

“We came up here because my wife was from across the lake over in New York,” Charlie said, “and she liked it up here.” Gert also held a degree in nursing and had a job at Fletcher Allen Hospital, making the move even more purposeful.

In Vermont, Charlie found a job as an engineer for General Electric. His work again took him to the far reaches of the globe. When asked about where he traveled for work, he replied, “All over Europe, Africa, and finally over into Australia and New Zealand.” Being an engineer was far from his only job. In addition, he had his own business searching for underground water—and he worked with The Charlotte News.

Charlie was with the paper from the start. “We started it a long, long time ago,” he remembered. “We used to just type it up on our own. We didn’t have an office to print it in, so we’d take it downtown to a place that printed it up for us, then bring it back here and pass it around. That was about 60 years ago.” His work with The News included writing articles occasionally, but his artistic work stands out.

If it was by chance that Charlie started sketching as a child, it was even more fortuitous that his pictures wound up in the paper. “When we first started The Charlotte News, we needed some illustrations,” Charlie said simply. He ended up with the job and promptly started sketching away.

Charlie would draw anything that caught his fancy, transforming a simple idea into a print-worthy picture. He got his ideas from “whatever was happening around town, or just something funny that occurred.”

His art was not just showcased in the paper. “I used to just put it on display—downtown, Burlington, places like that.” His illustrations were also collected in a booklet produced by the newspaper staff. “This was something that we used to put together once in a while and take to the Town Party,” Charlie said, as he drew out the small booklet. “We’d sell it to people and raise money by doing that.”

Skimming through the pages, Charlie pointed out some of his favorite drawings, laughing as he did so. “Here’s the Old Dock,” he said, holding up a particularly stunning rendering of the historic restaurant right across the lake.

“When I got to be in my eighties, we sold the little farm in Charlotte,” Charlie continued. He and his wife moved to Shelburne when the farm became too much to keep up. They still reside there but return often to the Charlotte community. Two of his children live in Vermont, with the third in Australia.

Charlie remains quite humble about his work with The Charlotte News. Despite his artwork helping the newspaper transition from only written pieces into an actual publication, Charlie only smiles and says, “I just helped the town put out the paper.”