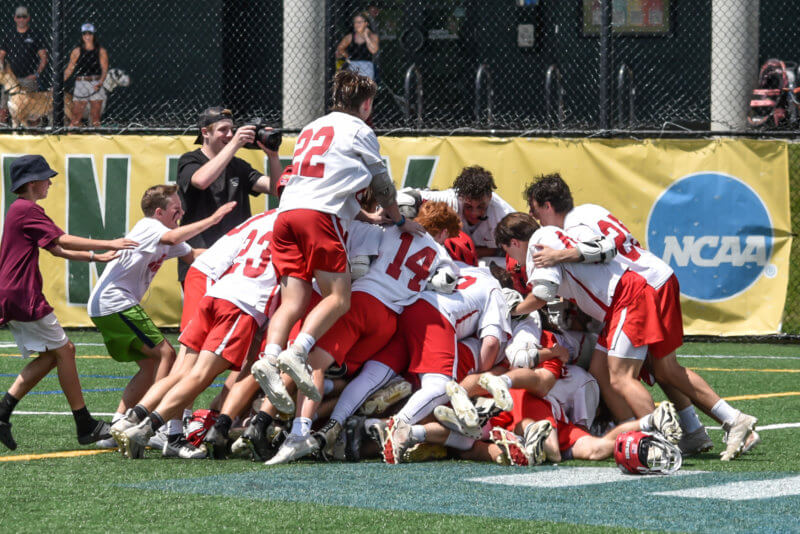 That term just doesn’t have the same poetry of the original title-streak portmanteau, but the Champlain Valley Union High Redhawks will have several months to contemplate a better term for their domination of Vermont boys high school lacrosse.

Coach Tom Garvey said he wasn’t comfortable with referring to the team’s winning ways as a dynasty. Wonder how he would feel about the term nine-nasty?

But that wouldn’t fully cover what the Redhawks have achieved over the years because the school has won a total of 12 state boys lacrosse championships.

On Saturday, Champlain Valley hung on for a thrilling 13-11 victory over Burr and Burton in the Division 1 title game to continue its title streak.

Garvey called it “an amazing win over a very talented, well-coached Burr and Burton team.”

Junior Max Destito had a goal and senior Colin Zouck had an assist.

If you’re noticing some patterns here, it might be that the contributions are spread around the team. Another is that, although graduating seniors are well represented, there are other players keeping the Redhawks in games that won’t be graduating this year and some who may be contributing for two more years.

“Our entire defense and goaltending by Jake Bowen deserve recognition for turning back Burr and Burton’s offense in the fourth quarter,” Garvey said. “The entire senior class deserves credit for their leadership both on and off the field.”

CVU 12 – Middlebury 3
The Redhawks beat Middlebury on Monday, June 6, 12-3 to advance to the Division 1 state boys lacrosse championship this past Saturday at the University of Vermont’s Virtue Field.

Needless to say, coach Garvey was proud of his team’s defense.

He also lauded the faceoff play of Devon Fay and Jacob Bose.

Gilliam and Williams led the scoring onslaught with four goals apiece. Gilliam added four assists and Williams dished out one.

Both Zouck and Pierce tallied a score and an assist.

Elliott, Bose and Max Brumsted each tossed in a goal.

Bowen had four saves for the Redhawks and Harper Anderson had two.

The score might have been even more lopsided except for goalie Ray Chamberland’s 10 saves for Mount Mansfield.

Amelie Scharf dominated for Champlain Valley on the offensive side of the field, netting five goals to go with three assists.

After trailing 4-0 after the first inning and 6-2 after the second inning, Champlain Valley managed to come back and take a 7-6 lead.

The Redhawks couldn’t put the Wolves away and South Burlington tied the game at 7-all in the seventh inning, then sophomore Stroh delivered his crucial homer.

Stroh was dominant at the plate going 3 for 4. He hit a single, a triple and the homerun for a total of three RBIs.

Ryan Canty was 2 for 4 with two doubles and two RBIs.

Oliver Pudvar was the winning pitcher. In his two innings on the mound, Pudvar gave up one earned run on two hits and got two strikeouts.