Our crew has a lunch policy. “Not a rule mind you, just a policy” put forward years ago by Charlotte resident John Rosenthal.

Lunch may not be taken before noon, seating should be comfortable, in the sun and out of the wind.

Given we had been skating for hours on incredible black ice, we were euphoric and famished. The speck of dirt called Diamond Island in Lake Champlain’s Narrows would have to do. Then, I saw the loons.

I almost missed lunch, and the next day would be one I will always remember.

Nordic ice skating at its extreme takes well-equipped skaters on tours for many miles on variable and dangerous ice. Devotees of this sport learn to read and test ice; they wear dry suits and life jackets and carry safety equipment.

On Saturday, Kevin Boyle, Dan Spada, John Rosenthal and myself were on a more than 20-mile skate on Lake Champlain and came upon a small hole in the ice with five loons in it. 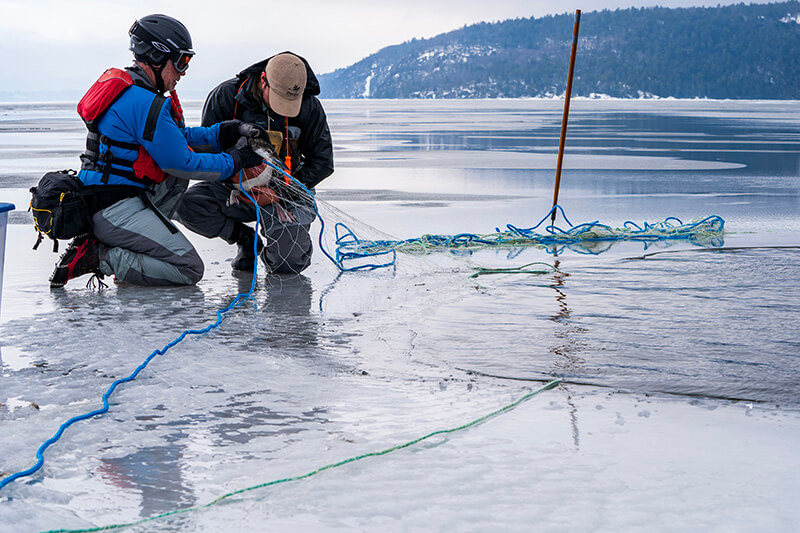 Common loons migrate from their breeding grounds to open water for the winter. Ideally these birds go to the ocean, but sometimes they stop at Lake Champlain. In a mild winter the lake can be a good place for them. But in a year like this when most of the water freezes, it can be a loon’s demise.

In winter, loons molt their flight feathers and cannot fly for more than a month. If the ice freezes suddenly, they can be trapped.

They will swim in circles to keep an area open, but if it is really cold the ice slowly closes in on them. Once trapped, they become easy prey for bald eagles and peregrine falcons.

The increase in loons being trapped in the ice is related to climate change. They should be triggered to migrate by encroaching ice on their breeding lakes in December, but now might wait until January or February. Instead of migrating to the ocean they can end up only getting to lakes like Champlain.

Knowing this, I called Nina Schoch of the Adirondack Center for Loon Conservation from the ice.

She answered on the second ring. When I told Schoch we were on Lake Champlain, she was direct and to the point: “How many loons do you have?” 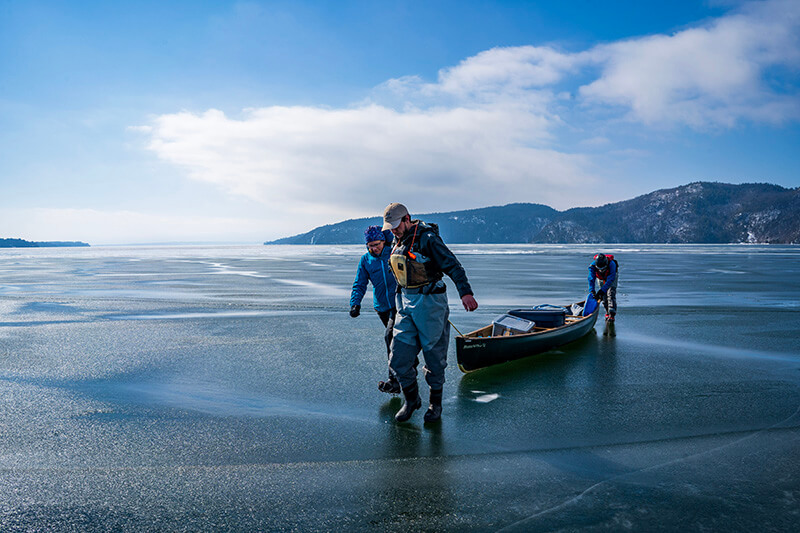 A barrage of emails and phone calls followed, and a rescue plan was launched.

These beautiful birds, with their wailing call that is the sound of wilderness and suspense, are not on the federal endangered species list but are protected by the Migratory Bird Act. Loons face many threats, including climate change, fishing line entanglement, lead poisoning and human disturbance.

Cody Sears, the center’s wildlife technician, led the rescue. Boyle and I were assigned to ice safety. Loon naturalist Ellie George handled checking the birds’ health once they were captured for transport to safer waters.

Susan Harry and Jackie Miller, also with the Adirondack Center for Loon Conservation, rounded out our skeleton crew.

First thing Sunday morning we were at the mouth of Otter Creek on Fort Cassin Point. In the distance through a spotting scope, I was able to see 12 bald eagles circling the hole and was disappointed to see only two loons.

Boyle and I skated out the mile and a half for a closer look. The eagles dispersed and all five loons were still there. Three had been diving to avoid being eaten by eagles.

We dragged a canoe across the ice, filled with nets and containers for the birds.

When a threat approaches loons will dive and resurface only for an instant to take a breath, but we draped a gill net over part of the hole. One by one, each bird in turn surfaced to become entangled. We quickly brought them out onto the ice, untangled and placed the loons in plastic bins.

We got all five in short order.

Back on shore the loons were carefully inspected for any wounds or other injuries. All the birds were OK.

One of the birds had been banded. It turns out that bird was twice lucky. It was rescued and banded by the Adirondack Center for Loon Conservation on Lake George last winter.

Thanks to Rosenthal of Charlotte, we knew that open water and safety for the loons was just 12 miles north of the rescue site at the Charlotte Town Beach.

Shortly, we were back on the ice in Charlotte, sliding the canoe with the boxes and their cargo of five loons across old ice on the inner bay to the edge and open water.

There the loons were released one at a time.

Within moments, the loons found each other again. We could see them swimming together in the distance with another chance to make it through the winter.

After our feverish work to get the loons released quickly and safely, perhaps it was Boyle who summed up our feeling best: “I don’t often get a chance to change the world.”

“These birds are some of the many iced-in loons that we have rescued over the last few years,” said Schoch. “Loon organizations throughout the Northeast have seen an increasing trend in iced-in loons in recent years, and we are now establishing trained rescue teams to respond. This winter alone in the Adirondacks, we have saved nine common loons from almost certain death, and more than a dozen have been saved in Maine and New Hampshire.”

To learn more about loon research and conservation efforts in the Northeast, visit the Adirondack Center for Loon Conservation, the Biodiversity Research Institute, the Loon Preservation Committee, and the Vermont Center for Ecostudies.