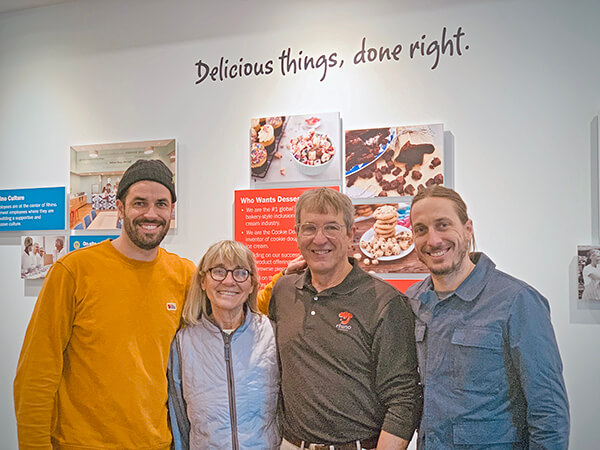 Left to right: Rooney, Anne, Ted and Ned stand at the Rhino entrance at their Burlington office. Photo contributed.

Ted and Anne Castle are proud to say that Rhino Foods was behaving like a B Corporation before that title existed. Certified B corporations are legally required to consider the impact of their decisions on their workers, customers, suppliers, the community and the environment. “We met some of the people from B lab,” Ted said, “and we wanted to be part of that mission and movement. We felt that their accreditation and audit process was good and we could use it as a guide to improve ourselves.”

Rhino Foods has come a long way since it was founded in September 1981. At that time, Anne was running Chessy’s Frozen Custard in the Champlain Mill. The couple decided to expand the business into a restaurant supplier and wholesale operation. “We were on our way to meet the lawyers,” Ted said. “We needed a name to incorporate and Anne came up with Rhino.” At the time, the name didn’t seem important because Chessy’s was their main business. Although neither Anne nor Ted had a particular interest in the animal, they both agree that it’s an apt name for the company. “Rhinos are big, strong beasts,” Ted said. “They are agile in spite of their size and they have strong families.”

When Anne started Chessy’s, Ted was working at the University of Vermont as the Assistant Men’s Hockey Coach, but after he left that position he joined Chessy’s as Anne’s assistant. Eventually they sold the original business to concentrate on Rhino and Anne stepped back to raise the couple’s two sons. Rooney is now vice president of the company. Ned has his own business doing video and photography and is responsible for a lot of the content on the Rhino website, as well as working part-time for the Rhino Foods Foundation.

Established in 2019, the foundation is a way to help formalize the company’s Income Advance Program. “We came up with the idea after a United Way training for Bridges out of Poverty,” Ted said. “Like many small businesses, we sometimes paid people early or loaned them money when they needed help, but we decided to be more proactive, so we set up an account with North Country Federal Credit Union.” Since the start of the program, over 500 Rhino employees have received roughly half a million dollars in emergency funding. The foundation was created so the program could grow independently of the corporation. 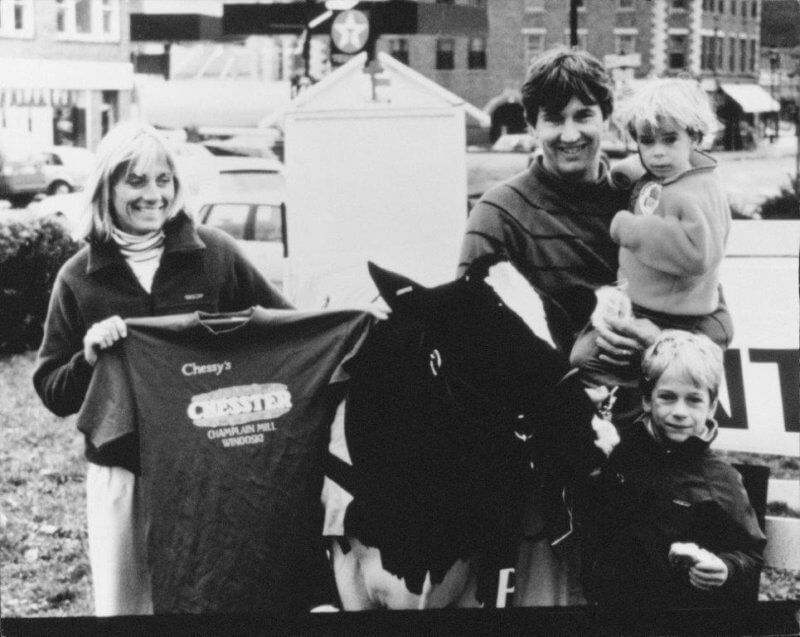 Another Rhino Foods initiative is the Employee Exchange Program, which began in the early 1990s. “One of our largest customers had a high inventory and didn’t need any product,” Ted said. “We only had 40 people then, but we didn’t want to let anyone go because we knew we’d need them in a few months.” Under the Employee Exchange Program, Rhino loans out workers to those who need additional seasonal employees. This winter, several worked for Lake Champlain Chocolates, but in previous years, Vermont Teddy Bear, Gardeners’ Supply, Resolution, and Ben & Jerry’s have been recipients. “We send the other company a bill,” Ted said. “Our employees get exposure to another business while staying on our payroll and keeping their benefits.”

In addition to their charitable work at Rhino, both Ted and Anne are consummate volunteers. Ted has served on the board of Prevent Child Abuse Vermont, Vermont Businesses for Social Responsibility, Shelburne Farms, Inc., and the Community Sailing Center. Anne followed Ted to the Prevent Child Abuse Vermont board and has also volunteered at Charlotte Central School and Champlain Valley Union High School. Prior to the onset of COVID, she spent well over a decade doing a weekly shift at the Ronald McDonald House. The two have also volunteered for Special Olympics for a dozen years.

Rhino Foods has grown in its four decades of operation to a 250-person corporation. “We’ve had a lot of ups and downs,” Anne said, “but I’m extremely proud of what Ted has done, particularly his great relationships with employees.” Ted notes that the company never had a goal of growing to a particular size and has always remained privately owned. “We’ve put most of our efforts into workplace practices and sharing them with others,” he said, adding that the Income Advance Program is now in place at 70 other companies. “It has helped over 1,000 individuals who might have lost their jobs because they might have needed new tires or a water heater,” he said. “I believe business is where the action is, and you can make your biggest change there, either positively or negatively.”