Wind blows strong, then a no-show for Diamond Island Regatta Wind blows strong, then a no-show for Diamond Island Regatta

The winds were kind on Lake Champlain this year — as they usually have been over the past decade during the Diamond Island Regatta.

On Saturday Aug. 13, the 10th annual 12.5-mile sailboat race from Point Bay Marina to Town Farm Bay took place in a steady breeze of 12-15 knots that kept the boats moving and their crews busy.

This year the race attracted 32 boats, a new record for the event benefiting the Lake Champlain Maritime Museum and sponsored by the Diamond Island Yacht Club. 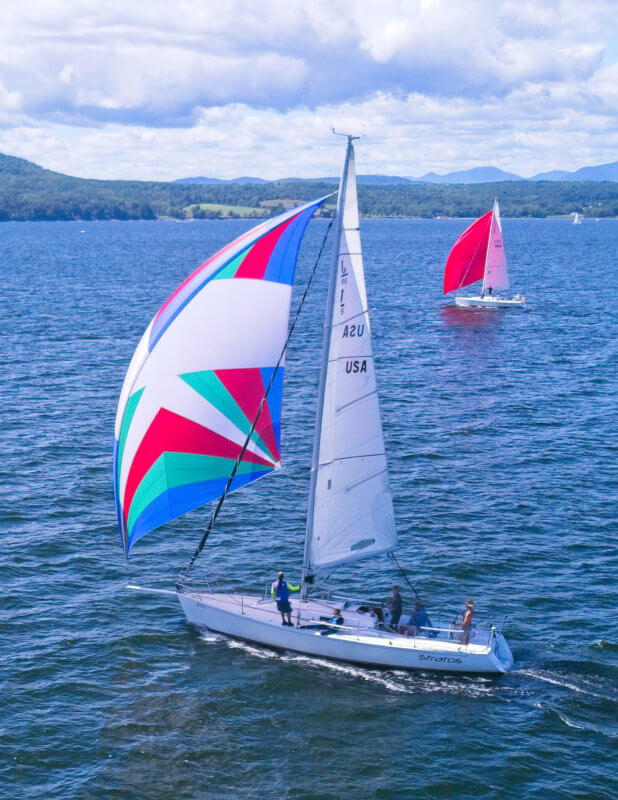 Alas, the next day, about 20 boats waited for more than two hours for wind — any wind — to fill in on Town Farm Bay, before the second annual edition of Diamond Island Yacht Club’s Split Rock Race had to be cancelled.

But the weekend, which in addition to being all about sailboat racing and camaraderie on the lake is also a fundraiser and that had already been a success. With a record turnout for both of the races, a lot of money was raised for the Lake Champlain Maritime Museum.

Boats came from up and down the lake with sailors from places including the Diamond Island Yacht Club in Charlotte, the Lake Champlain Yacht Club in Shelburne and the Mallets Bay Boat Club in Colchester.

Both races are part of the Lake Champlain Championship Series, a season-long competition that determines annual bragging rights in five classes: three spinnaker classes and two jib-and-main classes. The races are scored using the performance handicap racing fleet system, so boats with different speed potentials can compete against each other.

The steady wind for this year’s Diamond Island Regatta made for close competition in nearly all of the classes.

The first boat to finish was Kjell Dahlen’s Odinn, a J/111 from Lake Champlain Yacht Club, taking 1 hour, 39 minutes and 52 seconds to complete the course, which took the sailors from the start in Town Farm Bay north to a mark just south of Sloop Island off Charlotte, south to Diamond Island and back north to the start/finish line. 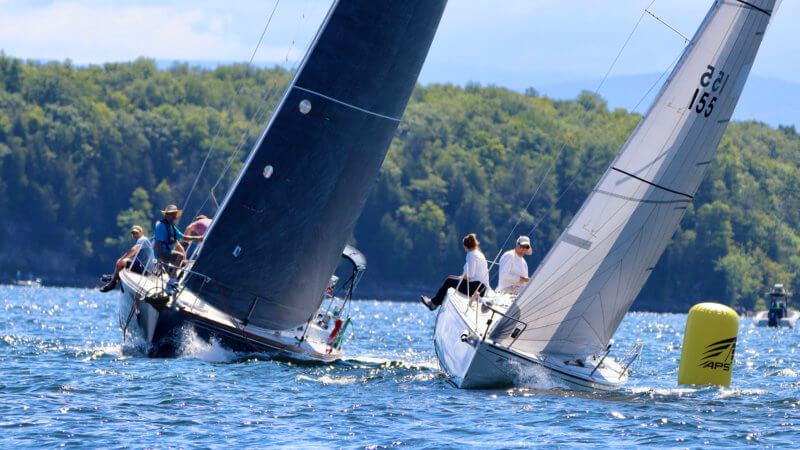 In Spinnaker Class C, Benedek Erdos sailed his Lil’ Bot, a Santana 2023R, to the only blow-out of the day, winning his class by nearly 12 minutes in a corrected time of 1:48:15. One of the smallest boats in the race, Lil’ Bot beat all but four of the Spinnaker A & B boats on corrected time.

In the jib-and-main B Class, Morning Star … Again, a Catalina 320 sailed by Stephen Unsworth of Lake Champlain Yacht Club, came out on top with a corrected time of 1:56:45, just a minute and a half ahead of Mackinac, a Pearson 32, sailed by Diamond Island Yacht Club’s Tim and Betsy Etchells.

Perhaps the biggest winner again this year was the Lake Champlain Maritime Museum. The money raised by the benefit events — the pre-race breakfast, the Lobster Fest dinner, T-shirt sales and a fundraising raffle — is still being tallied, but it appeared all the events would set fundraising records. And added to that will be the post-race sale of action photos of the boats from photographers Joe Gannon and Ramsey Hazbun.

While the wind didn’t cooperate on Sunday, it was a beautiful weekend to be on Lake Champlain.

After a day of racing, participants were treated to a presentation by Susan Evans McClure, executive director of the Lake Champlain Maritime Museum. She focused on the lake’s history and the 50th anniversary of the Clean Water Act.

On Sunday, the race committee tried in vain to find enough wind to run the Split Rock Race. The start was scheduled for 10:30 a.m., but while the wind wouldn’t cooperate, about 20 competitors waited. During the long postponement, race committee members shared some trivia questions over the radio, and a member of the crew of Salsa from Diamond Island Yacht Club showed off his waterskiing skill, slaloming between the becalmed boats for about half an hour.

Eventually, around 12:30 p.m., the committee was forced to abandon the race.

(Full results can be found on the Diamond Island Yacht Club’s website: diamondislandyc.org/dir-results-for-2022.)

Jib and Main A Class

Jib and Main B Class