With yes vote on new garage, Charlotte will keep its road commissioner With yes vote on new garage, Charlotte will keep its road commissioner

A barrage of garage “yes” votes in Tuesday’s election means the town will be building a garage to house snow plows and road equipment, and that road commissioner Junior Lewis will be staying on.

The two articles on building a town garage were supported by just over 78 percent of the votes.

The overwhelming support means Lewis will run for road commissioner in March. And unless there is some major gash in the space-time continuum, he will win.

Lewis is overwhelmingly liked and respected in Charlotte. Although there were a number of posts on social media criticizing the proposal to build a garage, almost all the critics took time to applaud Lewis’ dedication and hard work for the town.

With the prospect of having a place to work on his trucks inside, out of the snow and cold, Lewis said he’ll be keeping town roads in shape and free of snow for five, maybe 10 more years.

“It depends on my health and how things are going,” Lewis said.

When the garage he rented to house his snow plows and equipment burned in late December, Lewis said at his age he wasn’t going to build a garage he might only use for a few years, and he wouldn’t run for reelection if the town didn’t build its own. 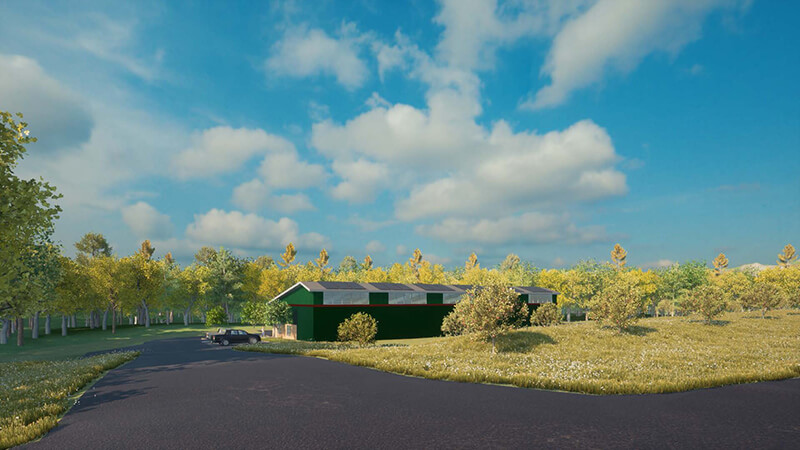 Garage rendering by Centerline Architects
The town of Charlotte released this rendering of some of the design ideas that have been discussed for the new town garage on Route 7. Town administrator Dean Bloch said this proposed design is intended to be solar ready, but the solar panels will not be part of the initial building project. Voters will be asked to approve financing of $1.5 million of the total $3 million cost of the garage. The rest of the $1.5 million will be paid from a federal American Rescue Plan Act grant and $500,000 of the town’s highway reserve and capital funds.

He spent much of the remainder of last winter working on trucks outside under a tarp in the snow and freezing weather. With a new garage on the way, Lewis said he could put up with working on his trucks outside for another winter.

There is almost no chance of breaking ground on the project before this winter, but he is confident that construction will start in the spring and a garage will be up before the next winter.

Lewis was pleased with how the voting turned out with much more than three times “yes” votes to “no” votes.

“I was glad to see that kind of a majority. It wasn’t really close,” he said, reiterating that the garage is not for him but for the town. He thinks that having the garage will make it much easier for Charlotte to recruit someone to replace him when he eventually does retire.

He is almost certain there isn’t an existing building that could house four snow plows. Having a town garage might be an incentive to get someone to go into debt to buy enough equipment to take care of the roads when Lewis does retire.

That’s what Lewis did when the town came to him in 1998 and persuaded him to become road commissioner when the previous commissioner decided not to run. He and his wife secured a loan, and now he’s going into his 25th year of being Charlotte’s roads scholar.

When Lewis was 16 in 1976, he started working on the roads for Lane and found he really liked the work — his first and only job.

It’s hard to exaggerate the Lewis’ impact on the roads in Charlotte. He even eliminated a season here.

With most other Vermont towns experiencing five seasons, Lewis reduced the number of seasons in Charlotte to four.

In his early years of being road commissioner, he went to the selectboard with his idea. “I said that I would like to build up the dirt roads to get rid of mud season.”

The town had a contract with Bob Titus to get shale from his property, but not much had been used. Lewis started getting shale in a big way to build up the roads. At first some people were against it.

“Then come the next spring after we were done, they had a totally different perspective,” he said.

In fact, attitudes about building up the dirt roads changed so much that someone proposed adding $110,000 to the budget at Town Meeting Day for road upgrading. And it passed.

What probably seemed like a lot of money more than two decades ago seems like a pittance today, especially when Charlotte’s not stuck with mud season.