You should realize that animals are running the world You should realize that animals are running the world

If you don’t think that animals are in charge, you are not paying attention. Or perhaps you are just lucky.

Consider your tulip bulbs being eaten by chipmunks, or your garden that is demolished by woodchucks. Perhaps bears have ravaged your garbage or bird feeders. Or your oak trees were denuded in June by spongy moths. What’s next?

Hardly a week goes by without a sighting of black bear, Ursus americanus, in our town. Consider the stunning photo by Nancy Wood in The Charlotte News earlier this summer of a mother and three cubs.

During mating season, between June and July, males cover territory 10-15 miles in diameter where up to 15 females may live. The Vermont Center for Ecostudies tells us, that because of the huge area they must explore, males have little time for foraging and lose up to 20 percent of their body weight in addition to the 20 percent they lose each winter.

Females reach sexual maturity between 2-8 years of age and will give birth to from one to four cubs every other year. Delayed implantation of the fertilized eggs, six months after mating, protects the female’s health. If she is unwell or does not have enough body weight to support cubs, the eggs do not implant and she will not have cubs that year. Thus, cubs are born after two months of gestation, about eight months after summer mating.

If for any reason you have not taken down bird feeders, please do it now. Bears attracted to feeders, homes, garages, barns and garbage cans can inflict serious injury and must be euthanized.

Red foxes
We’re on a speedy learning curve with our 2022 crop of woodchucks now dispatched and a family of red foxes currently denning in the barn. The good news is that bunnies are not devouring our surviving veggies. 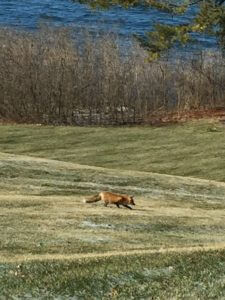 As for the foxes, we have watched them sprint into the barn in the late afternoon and they have chosen a patch of barn floor as their outhouse. What have we learned?

Red foxes, Vulpes vulpes, are not native to Vermont although native to other parts of this country. They were introduced by colonials who imported them for fox hunting. At 8-15 pounds, they are slightly larger than the grey fox and also occupy a wider range of habitats.

Vermont Department of Fish and Wildlife tells us that red foxes phase through several colors including black, yellow, a deep reddish brown, silver and grey. As a result, they are sometimes mistaken for the grey fox. The distinguishing characteristics of the red fox are long, pointed, black-tipped ears; black cheek patches; black leg “stockings;” and a long, bushy, white-tipped tail.

Breeding takes place once a year in late January through February. After about 50 days of gestation, the female gives birth to between one and 13 pups. She will remain with the litterPhoto by  until they reach sexual maturity at about 10 months.

The red fox is an omnivore, devouring small mammals, birds, woodchucks, insects, eggs and carrion, in addition to fruits and berries. They are an occasional nuisance, preying on domestic cats, poultry, lambs and young pigs and goats. Primarily they consume rodents, which is good news at our house.

Loons
Loons in Vermont have made a comeback in recent decades, slowly increasing their numbers. While they thrive on quiet bodies of water, a pair is nonetheless chortling and diving in Converse Bay this summer. Loons are flourishing in Vermont this year. Photo by Janet Steward courtesy Vermont Center on Ecostudies.

Each July, volunteers count loons on 165 bodies of water across the state, observing nesting pairs, chick survival and general health of the population. Loons are territorial and small lakes cannot host more than one breeding pair. If a single male threatens a loon couple, they may spend so much energy defending their territory that they fail to reproduce.

As of June 30 this year, volunteers had confirmed 96 loon nests, of which 34 were successful in producing 47 chicks.

Not zebra mussels
Any visitor to Lake Champlain is well acquainted with tiny zebra mussels, an invasive that reproduces vigorously, clogs water intake pipes and inflicts lacerations on those who come too near. It may be surprising to learn that Vermont is home to 17 different species of native mussels, making the state the most diverse mussel region in New England.

Mussels spend the majority of their lives in one spot, glued to an underwater surface. Most mussels use a host fish to disperse in their larval stage, growing in the fish’s gills until they drop off to spend the remainder of their lives wherever they land.

Since they are sedentary, mussels are good indicators of water quality. They are highly sensitive to pollutants, such as increased amounts of sediment in the water column and runoff from agricultural fields. Mussels improve water quality by filtering, feeding on micronutrients and algae that pass through them. Keep your eyes open — I have spotted mussels while kayaking in clear, shallow water.

May the animals that cross your path be benign. Enjoy our summer days.